The Ollivers of West Sussex

In April and May this year my research was focused on adding to my collection of information on my Olliver ancestors and their relatives.

I was particularly interested in a mystery which came to light right at the beginning of my research, but unfortunately I still haven’t got to the bottom of it. On the 1893 certificate of marriage between Bushby Olliver and Sophia Collins Bushby’s condition is given as bachelor. It’s a copy that has come down through the family, so one assumes that that is what Bushby told the Registrar. But between 1871 and 1881 Bushby had at least 6 children (of whom only 3 appear to have survived) with Harriet Hacker, who is described as his wife in the censuses. I haven’t been able to find any marriage certificate for Bushby and Harriet; although this doesn’t necessarily mean that they didn’t marry, it may be a likely explanation. It doesn’t help that I don’t know whether they met in Sussex or in London: in 1861 Harriet was still living in Sussex, but I haven’t been able to find a census entry for Bushby for that year. By the time of the 1871 census they were living together in London and their son Robert Bushby Olliver was born in the August of that year.

Bushby is still described as married in the 1891 census, when he is living with two of their three surviving boys, but I have not so far been able to locate Harriet in this census nor find any likely-looking death certificate for her. Perhaps she was in service and staying away from home on census night, or perhaps the family had split up? Curiously, Bushby is described as deceased on the 1908 marriage certificate of his youngest son by Harriet (who is not at home with Bushby in 1891). This threw me off the scent for a while when trying to find a death certificate for him as, in fact, he didn’t die until 1923. Had father and son just lost touch, or does this hint at some kind of family break-up? It seems strange that they weren’t in contact given that the 1908 wedding took place at St Philip Lambeth, less than a mile away from the Brixton Road addresses where Bushby was living between at least 1893 and 1901 (although he had moved away to Greenwich by 1911).

Another reason it took me so long to find a death certificate for Bushby is the number of mis-spellings of his (admittedly rather unusual) name in the records: I’ve found him indexed as Rushby, Bushley, and Buesley. Bushby’s name seems to have come from his grandmother, Ann Bushby, who married Edward Olliver in 1781. Ann lived to the ripe old age of ninety, dying in 1842.

In 1841 Ann had been living with her two youngest daughters, Jane and Emy, who were living in the intriguingly-named Miller’s Tomb Cottage by 1851. I thought at first that I had mis-read the address in the census entry, but a Google search turned up a number of images and articles, my favourite being Valerie Martin’s A Miller’s Tale. There is actually a Miller’s Tomb on Highdown Hill near Worthing, built by a John Olliver; John was, I believe, Jane and Emy’s great-uncle. Their father Edward was a miller too, as was their brother, Robert Bushby Olliver, Bushby’s father. Robert was living in Havant, Hampshire when his son Edwin was baptised in 1828 but had moved back to Worthing by the time his son Edward was baptised in 1833, shortly after Edward senior’s death. 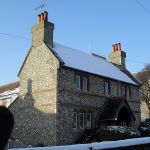 In their old age, Robert and his wife Mary moved into Humphrys’ Almshouses in Worthing, where they lived until their respective deaths in 1859 and 1871. The Almshouses were founded in 1858 for Anglicans of Broadwater. In 1861 Mary was living at number 3; this house has been demolished but numbers 7 and 8 (left, built a few years later in 1867) were still standing in 2009. Mary’s death was reported by an Ann Olliver, who may have been Mary’s daughter-in-law, Ann Ayling, or her granddaughter, Ann Olliver.

So some questions remain. Where was Bushby in 1861? And what happened to Harriet?

This entry was posted in Uncategorized. Bookmark the permalink.

5 Responses to The Ollivers of West Sussex

This site uses Akismet to reduce spam. Learn how your comment data is processed.